[FAKE] Suspected of being infected by Corona Virus, HNGV isolated a member of F-FDTL Featured 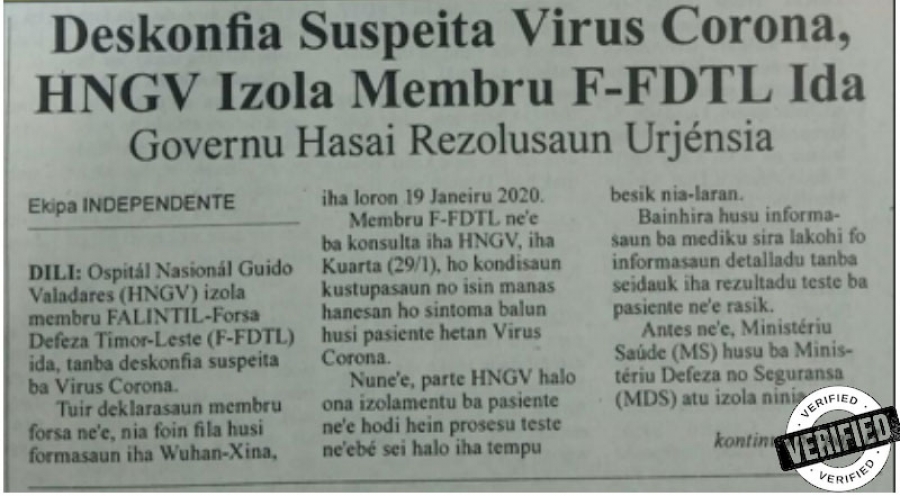 Many people in the world including in Timor-Leste are now panicking with Corona Virus. Although this virus appeared in Wuhan, China, it made many people feel very worried. In Timor-Leste, although the virus has not yet been detected by the government, the government has begun to intervene by placing medical personnel at international airports, land borders to check Chinese citizens and East Timorese citizens who return from China.

Thus on January 30, 2020, the headline of INDEPENDENTE daily newspaper about Corona Virus. According to INDEPENDENTE news that it was allegedly hit by the Corona Virus, HNGV isolated a member of F-FDTL. This news is very interesting but unfortunately it is not confirmed by the relevant parties. Especially medical staff at Guido Valadares National Hospital (HNGV) and medical FALINTIL-Forças de Defesa de Timor-Leste (F-FDTL) or the Timor-Leste Defense Force have not released the correct information INDEPENDENTE quickly and hurriedly publish this news in The Head Line that finally made this news had no connection with the reality and the facts that happened. This news also made many people take photos and share again on social media platforms like Facebook. This news has become viral on Facebook because many people are sharing with each other.

After just a few hours, You Tube Channel published this news again by manipulating some photos of F-FDTL members while giving blood donations.So Timor-Leste's Fact-Checker categorizes this news as false because the actual facts show that until now the HNGV has not isolated a person suspected of being infected by the Corona Virus, and medical personnel from the Timor-Leste Defense Force also publicly provided information that their members just returned from China not get Corona Virus.

According to a statement from F-FDTL Second Navy Lieutenant medical personnel. Dr. Elvis Eugenio Gomes via his Facebook post (Buena Fe) asked the public not to trust the information published in this media.

“Ask the public that do not trust the information released by this media. It is clear that we are isolating a member who has just returned from China as a preventive action because anyone who has just returned from the endemic area must be isolated for 14 days but that does not mean this person has contracted the disease but again this is only as a preventative action and I want states that I am a medical person who conducts Medical Check up. We have checked up our member and want to declare to the public that our member are in good health, there are no health problems related to Corona Virus. Thank you very much for your attention. Big Hug”.
Dr. Dr. Elvis Eugenio Gomes
Second Navy Lieutenant.

Earlier on Wednesday January 29, 2020 Medical Group (The 8th China-aided Medical Team Held), together with the HNGV, conducted a press conference about pneumonia that was transmitted through Corona Virus. The Medical Group stated that there were no cases of the Corona Virus in Timor-Leste. The Press Conference was conducted by (The 8th China-aided Medical Team Held) Li Musheng, ICU Dr. Huandan and Vice-President of HNGV, Dr. Flavio.